Preliminary hearing of the case took place at Pervomaiskiy district court of Minsk “On compulsion to bring the house in accordance with the construction norms and creation of barrier-free environment”. The claimant is Richard Pavlovskiy, wheelchair-bound disabled. Defendant – developer “BelInte-Roba”. The essence of the case is the following: Richard Pavlovskiy signed an agreement with “BelInte-Roba” “for constructing apartment in block of apartments in Minsk, Masherova av. 43. The construction was finished in December 2010 (claimant’s statement of claim)”. 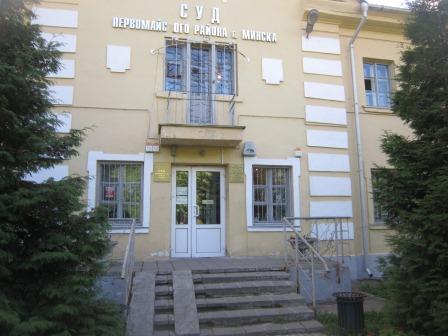 But after Pavlovskiy had examined the block of apartments he found several discrepancies to the norms of barrier-free environment. “Conditions that prevent me from free movement were created at this block of apartments, because I am a wheelchair-bound disabled. – He wrote in his statement of claim – That is why we can say that the developer violated construction norms. The developer refuses to bring the block of apartments in accordance with the construction norms. But we have to understand, that by deceiving its clients the developer, first of all deceives the state. Because what hadn’t been done in accordance with the norms is, in the majority of cases, redone by the state, money is allocated from local budgets of executive bodies”.
Before the hearing Richard Pavlovskiy characterized the situation the following way: “I have such an impression that I was sentenced to life imprisonment in my own apartment without the right for appeal. But this sentence was given not by my destiny that made me a disabled. It was done by the developer, which considers that such small problems as the heights of thresholds don’t influence the quality of construction. I don’t know what the court’s decision will be. But in any case it will be the indicator of the society’s attitude to the problem in a whole. And it will concern everyone. Because the creation of barrier-free environment is not just about following some legislative acts, first of all, it’s about the state’s image, it is the indicator of the state’s “maturity”, if it is possible to say so. A person with disability is the same as all other people and he wants to be self-sufficient and fulfilled in life”.
Richard Pavlovskiy had to enter and leave the court building with the use of other person’s help, because the main entrance’s ramp is not fit for moving of a person with disability and is violating all the norms.
There were the claimant and the defendant with their representatives at the court room and the representatives of the Central district administration, which is responsible for the block of apartments in Minsk, Masherova 43. The representative of “Glavgosstroiexpertise” didn’t come to the court. Although, it was “Glavgosstroiexpertise” which gave the conclusion that “the heights of door thresholds on the way to elevators is 6 centimeters, what doesn’t correspond with the rules p.519 SNB 3.02.04-03 “Apartment buildings”. 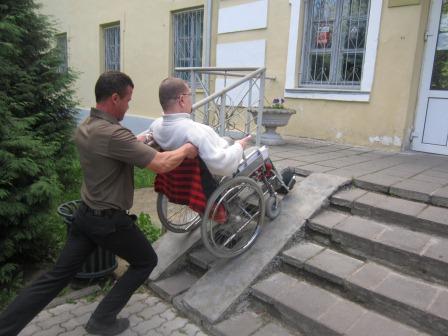 Preliminary hearing had lasted for 2 hours. The defendant had only partially agreed with the claim. Even not an expert in the construction sphere could understand that the norms of barrier-free environment were violated. But the defendant tried to shift the responsibility for the violations onto its general subcontractor “MAPID” which did all design and construction works. But two questions: WHO approved the “wrong” project and who signed the acceptance certificate of the building were left without answers. The administration of the Central district, exercising control functions, and the chief engineer who accepted the bringing of the building into operation said only the following words, which very good characterize the existing attitude to persons with disabilities: “But this apartment building wasn’t planned so that wheelchair-bound disabled would live in it”. After such words even the judge Petukch asked the official “Do we have apartment building in which disabled can and can’t live in?”. And offered to read the Constitution of the Republic of Belarus. When the official from the Administration was asked: “Why didn’t you react to Pavlovskiy’s appeal?” she answered: “The apartment building is at the balance of partnership of the owners of the building, and we redirected the appeal to them and recommended to solve the problem with barrier-free environment. They are the owners and had to take measures to fulfill the norms”. So, according to the opinion of the official, the execution of the norms of barrier-free environment is defined not by our legislation, but by the decision of the partnership of the owners of the building! But if they decide that there is no need to fulfill the “State program on creation of barrier-free environment for physically weak person for 2011-2015” so be it…
“It is a complicated case, - said the judge at the end of the hearing. – We need to listen to the parties once again. We have to listen to the specialists. If it is not enough the court will schedule expert examination. The main task of the court is not to be in a hurry, but to execute the law of the Republic of Belarus. The next hearing of the case is scheduled to September 21, 2012. Beginning at 16.15. It will be the open hearing.